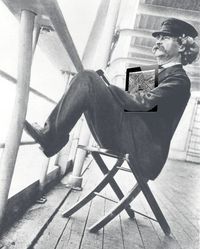 A quick search online reveals the literally hundreds of articles and blogs being written about this week's forthcoming announcement from one of the nation's world's hottest brands, Apple. It is widely rumored that the announcement will be education-related and address the textbook market. Even the New York Times can't resist joining the media frenzy:

Talk of such a move by Apple has been bubbling since a biography of Apple’s late chief executive, Steve Jobs, came out in October. In that book by  Walter Isaacson, Mr. Jobs told him that he wanted to transform the textbook market by hiring prominent textbook writers to create electronic versions of them for the iPad. Mr. Jobs told the author that he believed Apple could get around state certification processes for textbooks by making them free.

Now, while I have no inside knowledge of what may or may not be announced (and I don't routinely comment on individual companies)*, I am lucky enough to have some insights into Apple's past foray into digital instructional materials in K-12 education via their iTunes platform. After all, it was with SETDA that Apple first launched a K-12 themed version of iTunes U in 2008. Indeed, three and a half years later, the digital future of instructional materials and textbooks seems clearer in some ways and murkier in others.

What we know: Textbook costs and quality are an issue. Textbook content should be modular, more engaging, effective, high-quality and up-to-date. Open educational resources (OER) offers the promise of customized, shareable content. The market is not functioning and there is a need and opportunity to disrupt it, drive innovation via technology, and radically reduce costs. Can Apple do for educational publishing what it has done for music and apps? Seems entirely possible…

And what we don't: It remains to be seen how well Apple's business interests align with all those who have been advocating for variations on the theme of digital textbooks – and Apple's iTunes U platform is just ok for use in education (it wasn't built for education after all). Indeed, it seems to me that what we are debating right now, broadly speaking, is what combination of shapes and forms the digital future of textbooks should take (open or closed? modular and interactive or flat PDF? social or siloed? A few dominant players or a vibrant ecosystem? Etc.).

In that vein, and after the dust settles and details emerge, here is what I hope is standing:

1. Apple retains an avenue for self-publishing of OER by individuals and organizations (non-traditional publishers) and promotes OER content resources alongside those of any publisher partners that may be announced.

4. Apple supports the ability to include OER content in iTunes U/their platform, even if it is hosted on 3rd party servers.

5. Apple incorporates the ability to include more robust academic metadata in iTunes U/their platform (including alignment data, subject, grade level, etc.), as well as metadata on the intellectual property license of content objects – and to be able for users to search/filter on these terms.

6. Apple provides access to robust analytics on the usage of 3rd party OER content, including to automate import/export data about how users are interacting with OER content published in iTunesU/their platform via services like the Learning Registry.

"It is difficult to make predictions, especially about the future," is a quote oft-attributed to Mark Twain, and I recognize that I am going out on a limb to do so in sharing these thoughts. So, dear readers, what am I missing and what do you think?

* Apple supports the work of SETDA.